I’ve been meaning to write this entry for a few weeks now, but other posts always took precedence over it. My life finally became boring enough to give me the opportunity to write it. ;)

I received my AncestryDNA results about two months after I mailed off a tiny test tube of my saliva to Ancestry’s lab in Ireland (I’ve seen that other kits get sent to Utah. I’m not sure why my saliva was so special that it had to be sent overseas). I didn’t mind waiting this much time to receive my results because, for one thing, it was realistic due to the large volume of kits they would have received from individuals who received them as Christmas gifts. Secondly, I would hope that they would need a proper amount of time to complete the test, otherwise I would have received inaccurate results (and I ain’t paying that much money for a botched genealogical test!)

I’m not sure how loud I gasped when I first saw the email with the subject “Your AncestryDNA results are in!”, but I do remember my eyes bugging out of my head and my fingers were suddenly unable to type properly while trying to text my husband that I finally received that long-awaited notification. I logged into the website with bated breath, my left hand covering my mouth as I read my results. 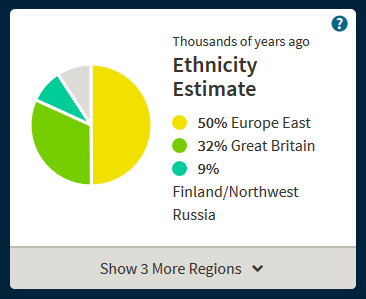 I was not surprised that the test determined I was 50% Eastern European since my mother is 100% Polish. I also was not surprised that I had roots in Great Britain, but I originally thought them to be 25% instead of 32% (this may also shed some light about the great love I have for London, England). The biggest surprise was the 9% Finland/Northwest Russia since I have never heard of any family being from this region and thought the 9% would be Netherlands. Once I read further into my analysis, I understood that these numbers reflect “where your ancestors came from hundreds to thousands of years ago”, so my ancestors probably immigrated from Finland/Northwest Russia to the Netherlands and I just haven’t been able to go that far back in my family tree yet (something I now look forward to doing!)

Another neat thing you get out of the results are relationship links to other people who have taken the AncestryDNA test that are related to you. Through this feature, I found out that I have a third cousin living in Edmonton that I have never met (at least I don’t think I have). I’ve already been creepy and stalked her on Facebook, but I’m too timid to friend her (AWKWARD!) Maybe I will if we connect through the Ancestry website first.

And the more people take the AncestryDNA test, the better the results become regarding your ancestry! This past week, AncestryDNA introduced a new feature called Genetic Communities which are groups of AncestryDNA members who are connected through DNA most likely because they descend from a population of common ancestors, even if they no longer live in the area where those ancestors once lived. This feature, which is still in beta testing, was where I understood and finally found my connection to the Netherlands.

Now that I have a better idea of my ancestry, I am tempted to obtain a paid subscription to the website so I can add more information to my family tree.

And maybe eventually I’ll make contact with that third cousin I’ve been stalking.