Ahoy hoy! How was your weekend?

Mine was more eventful than usual, especially Saturday. Y’see, I consider myself to be quite a homebody. I’m not big on the socializing thing until the void I have created around myself becomes too much and I gotta get out of the house and see some different faces for a few hours.

Luckily, my friend Fiona invited me to an event she was hosting, so I decided to hit the “Going” box on the Facebook event page and made plans to ensure I could attend. The event she was hosting was the second annual Game Night for the 100 More Coins fundraising campaign that raises money for the Alberta Children’s Hospital Foundation in Calgary. There were promises of board games, ping pong, Foosball, a Mario Kart tournament, and snacky-snacks. SOLD! 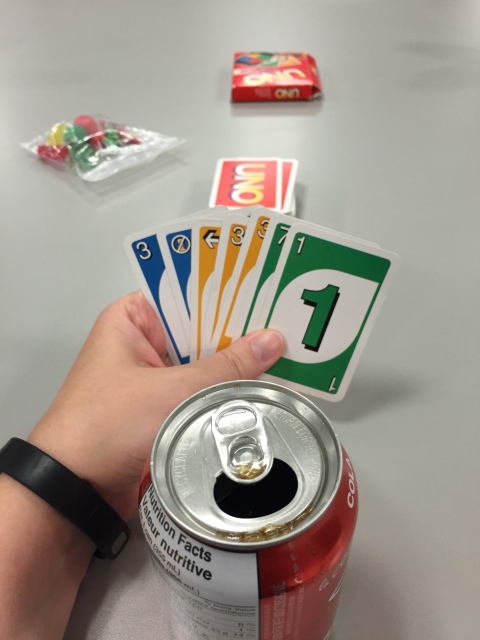 I was glad to see that my group of Twitter friends would also be in attendance, because those ladies know how to have fun! We even got Bobbi, who proclaims to not play games, to actually play some games… and she lives to tell about it! I had the opportunity to play ping-pong for the first time ever. Well, if you want to call what Rosie and I did ping pong. More like a couple of girls chasing a ball around the room and sometimes keeping it low enough on the table for three or four good volleys. That was until I would mention “Hey! We’re getting good at this!” when the ball decided to go bouncing off again as if on it’s own accord. Note to self: ping pong balls hear all!

Ooh! Ooh! Ooh! I also participated in my first (albeit, short) Mario Kart tournament! I was so scared of my competition beforehand that I practiced the night and morning before on Mario Kart 8 on our WiiU, ensuring I got the timing of my drifting just so. I got nervous just before the tournament began when I found out that we would be using the original Wii and Mario Kart.

There only ended up being four participants — two children and two adults. The competition from my adult counterpart was fierce, but I ended up winning our round due to the various misfortunes the game deals out. When it was time for the final battle, I was squared up with a young boy named Landon. On the outside, he didn’t appear to be too bad at the game, but once you place a Wii controller in his little hands, he’s a regular little Mario (Andretti, not the other one). I could go into more detail about which race it was (I can’t remember), or how many times I was on the receiving end of a lightning bolt (too many), I just know that young Landon schooled my ass and won first place in the tournament. Ah well, I graciously accepted a Timmy’s gift card as a consolation prize, and gave Landon a high five.

After my defeat, I drowned my sorrows with a Coke and joined my Twitter friends in a few games of Uno followed by a game of Mystery Date, where we developed a penchant for saying “Open zee door!” in bad German accents. I ended up being the winner, and got to go out on a picnic lunch date with a handsome guy who owned his own bicycle.

What are some of your favourite games to play? For video games, I like old ones like Road Rash (Sega) and SSX 3 (X-Box), and I’ve always had a soft spot for The Sims (PC). As far as regular games go, I’d play cribbage or Jenga without any complaints.