My husband and I recently moved from the Westminster area on the north side to the London Road area on the south side. Lately I have been going on walks to explore our new neighbourhood and get in a little exercise. I don’t usually bring my camera with me on these walks, but yesterday I decided to just in case I might capture something I could share here on the blog. The timing of yesterday’s walk, along with the fact that I actually brought my camera with me, allowed me to catch a local event as it happened. 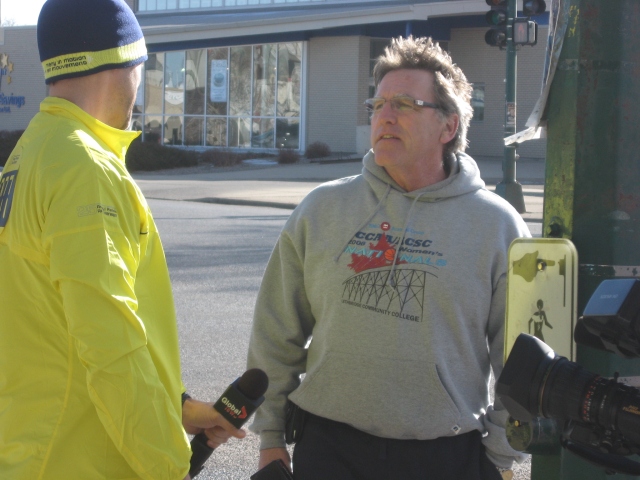 I stumbled upon Mark Campbell and his camera crew around 11 a.m. as he was preparing for one of his Scene and Heard segments at the corner of 13 Street and 3 Avenue South. He was joined by a couple of relay participants and their supporters for the 25th anniversary of the Rick Hansen Relay.

Traffic came to a halt as the relay bus and participants headed west on 3rd Avenue with a police escort to control traffic. The group quickly got together in the middle of the westbound lane to snap a couple photos, and then they prepared to start filming the segment and continue the relay.

Since Mark and relay participant, Darren Eveleigh, would be jogging their segment of the route together during the interview, a cameraman set up in the back of the relay bus to film them as they went. 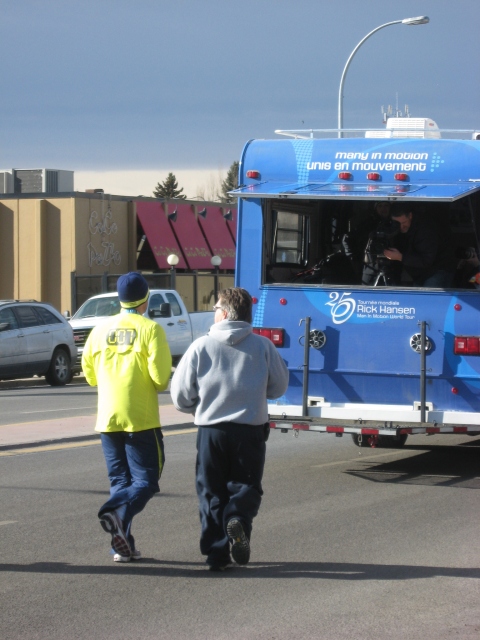 It was chilly as Mark and Darren set off along the route and straight into the wind. Good thing they dressed in layers because I found the wind to be incredibly nippy that morning and didn’t envy them one bit.